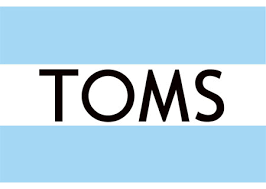 TOMS shoes have become very popular all over the world. Everyone seems to be buying these shoes because they are really comfortable and they go with just about anything. Unlike most famous shoe designer, TOMS has one of the most touching stories of how it began and grew into a large company.

The founder, Blake Mycoskie had first gone to Argentina in 2002 when he was in the second season of “The Amazing Race”. While he was there, he fell in love with the country and returned in 2006 as a tourist. He enjoyed the culture, and even became accustomed to wearing alpargatas, a popular form of footwear there. During his sight seeing and traveling in the outskirts of major cities, he was disturbed by the level of poverty in which the people lived. He noticed that there was a very large number of children whose families were too poor to afford a pair of shoes for
them. To make matters worse, children here are not allowed to go to school if they do not have shoes. They were also exposed to many diseases. With his newly heightened awareness, he wanted to do something to change the lives of these people.

He met a woman whose organisation collected shoes from donors and gave them to the children and shared his ideas with her. He noticed that the organisation was very weak because it depended fully on donations which were very low. At first, he wanted to start a charity of his own that would buy the right shoes for them but he was worried his resources would eventually dry up along the way. Then he resolved to start a shoe company with a “One For One” policy. This meant that for every pair that his company sold, one pair would be given to a child in need.

Then came the difficult task of looking for a design that would fit the North American market. Blake then remembered the common alpargatas that everyone wore. They were simple canvas slip on shoes which he wanted to improve and come up with new designs. He met a friend with whom he shared the same passion and off they went, travelling to many places and meeting shoemakers who would offer their assistance. They struggled to make 250 pairs of shoes which Blake carried back to the US to sell in 2006. His next task was to find someone to buy the shoes. He got his big break after he had found a retail customer. The fashion writer for the Los Angeles Times wrote an article about the shoes and by the end of the day, he had received over 2000 orders.

That number was over ten times what he had in stock. Blake found three hardworking employees and went back to Argentina to make more shoes. While he was away, publicity grew rapidly and almost the whole country wanted a pair. TOMS were also featured in widely read magazines like Vogue, Elle, People and Time and within a short time, popular celebrities were spotted wearing TOMS.

Within the first six months of production, Blake and his three partners had sold over 10,000 pairs of shoes. While still maintaining his “One For One” policy, he delivered the first consignment of free shoes to Argentinean children in October 2006. Later that year the company got a huge financial boost when Blake sold his Driver Education Company. This meant that they could be able to make more shoes to meet the growing demand.

TOMS was shoved into publicity mainly because of the story behind each pair of shoes. Every person who heard the story wanted to buy a pair. They all wanted to be part of the initiative. It’s kind of a new thing and it has proven to be a very good marketing strategy. At first, TOMS was intending to provide shoes to the needy and it is this story that made everyone want to buy one. The company has grown beyond shoes and now they make clothes and eye wear. They are still focused on helping those in need in many societies around the world.

They are also offering FREE shipping with your $25 purchase and there are lots of products in the sales section at up to 25% off.